Axel(VYM137) was born in the Young Ones Mob on the November 7, 2006 with two litter mates. Asterix was Axel's mother and Alexander was his father. He had two litter-mates VYP138 and VYP139. After four weeks the pups began to forage with the adults, Axel's two sibling were both predated leaving Axel as the only survivor. Then on December 23, 2006 the Young Ones encountered the Whiskers splinter group. The Young Ones ran away without knowing they had left Axel behind. Being barely a month old on his own in the big dry Kaharai desert, Axel was as good as dead. He would make an easy target for passing by predators, however his cries for help were heared by an adult meerkat.

Luckily for Axel a subordinate male of the Whisker named Logan heared his cries and came over to the small helpless pup. At first, Logan was confused on what to do but he finally took Axel to Rocket Dog, the dominant female of the splinter group. She had just lost her own litter afew days before and was still producing milk, so with her mothering insticts still strong she adopted him as her own. Soon after Axel joined, the splinter group re-united with the other half of the missing Whiskers. Rocket Dog handed over leadership to her mother, the dominant female, Flower who was pregnant and could've killed Axel, but surprisingly, she didn't even notice Axel was in the group, or perhaps mistook him for one of her own pups who had been in the splinter group before they were lost. Not long after, Flower died of a snake bite and Rocket dog took over as dominant female of the Whiskers again. Axel wasn't the only pups in the Whiskers for long. In Febraury 2007 Hawkeye, Finn, Flo, Petra and Ella, gave birth to a mix litter of eight pups named Burdock, Squig, Amira, Rufus, Rhogan Josh, Murray, Chiriqui and Etosha.

The Whiskers were now up to forty seven members, the biggest they ever have been. Rocket Dog conitued to care for Axel even with new pups in the group, however at three months old Axel was no longer a pup. The summer rains were late tha year, and with the Whiskers being so large, the mob had to spread out over a large area to find enough food. Some fo the Whiskers got separated forming a splinter mobs known as the Aztecs. Axel remained in the main group with Rocket Dog and Logan. Later, in September 2007 Zaphod took some of his sons on a roving trip and joined the Aztecs including Logan, Axel's savior. Axel soon reach adulthood and started to babysit when Rocket Dog gave birth to two pups in November. The Whiskers began to dwindle in numbers over the pass year and in March 2008 Rocket Dog was bitten by a snake when a snake had made it's way into the burrow. During a burrow move, one of the pups named Marico was left behind, and Axel came for him. At a year and a half Axel started to rove with the other adult males. Then in June 2008, dominant male Machu Pichu, Wollow, Axel, Rufus and Rhogan Josh lefth the group for good to go roving.

The five males came across the Lazuli while almost all the males were roving. The five Whiskers boys found it easy to join the small group. Machu Pichu took dominance, but was recovering from a bad snake bite and was ousted by his nephew, Wollow, who took dominant male position. At some point while dominance was unstable, Axel managed to mate with the dominant female, Young, but it is unknown if he fathered any of her pups. All the males started to rove again now that dominance was settle. Wollow started viciously attacking the other males whenever they would return from roving. Then in December, Machu Pichu and Rhogan Josh left the group and formed a group call PK that would soon be lost. Axel was now the oldest male under Wollow and would find himself attacked most often. Axel was one of the last Young Ones alive after his birth mob died out by then. Some Young Ones males had joined the Elveera and his two brothers were in the Chuckle Bros. Axel stayed in Lazuli for almost another year roving with Rufus and the other Lazuli males. He would sometimed even rove with older males from other, mobs, like Bruce and Sid Vicious. Axel often roved at the Elveera which at the time was infected with disease. He may have fathered some subordinate female's pups within the Elveera after he appeared near the group a few months before Chibuku Scud gave birth. In October 2009, Axel left the Lazuli for good with two young Lazuli males named Lutzputz and Prieska, the three rovers were seen with Stop it and a wild meerkat. The new group wasn't given a name because the group was lost within tha same month it formed. Stop It soon became pregnant, and it seemed as though Axel would bcame the dominant male. However he sadly died of TB in December 2009 and the group wasn't followed after that. The remaining members were marked with TB.

In Meerkat Manor, Axel was seen as a Zappa pup, son of Punk(Asterix) and Houndini(Alexander). His littermates, VYP138 and VYP139, played Slash and Rose, who were only mentioned once. Axel was rescued by Mitch who played Logan after Axel got left behind from the group in season 3. The Young Ones were often used for Zappa forage. In Meerkat Manor season 4, Axel was always around Mitch(Machu Pichu) and started babysitting. He even chased away his two older brother Wilson(Homestar Runner) and Philippe. Axel was seen saving Flashman(Marico) when he got left behind during a burrow move. It was said he was returning the favor Mitch(Logan) had done for him. 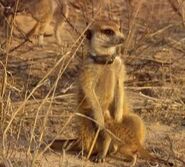 Rocket Dog and Axel when he was adopted

Young Axel in the Whiskers

Axel sitting down on the job

Axel in the Lazuli