Busta(VWM111) was born on September 2, 2006 into the Whiskers. His mother was dominant female Flower and his father was dominant male Zaphod. His litter-mates were one sister Izzy(VWF110) and one brother Suggs(VWM109). They were Flower’s twelfth litter. They were also Flower and Zaphod’s last surviving litter. Busta and his litter survived even being separated from the Whiskers with only three members in rival territory. The pups survived their first few months and began to foraging for themselves. On November 20, 2006 Flower gave birth to his little brothers Ren(VWM112) and Stumpy(VWM113). The group splint in two, one half being led by Flower and Zaphod the other being led by Rocket Dog and Mitch. It is unknown who’s group Busta and his siblings where in. Ren and Stumpy were lost however the group adopted Axel of the Young Ones. The splinter grup was able to rejoin the main group. His sister Izzy was predated on January 11, 2007. His mother Flower died of a snaked bit on January 16, 2007. Rocket Dog took dominance of the whole Whiskers. His father Zaphod left the group to find a new mate. A Commando rover named Drew soon joined the group taking dominance beside Rocket Dog. Zaphod returned after failing to find a mate and chased away Drew. Busta's older sisters Hawkeye, Petra, Flo, Fin, and Ella all gave birth to eight pups. In late 2007, Busta’s litter-mate brother Suggs left the group with his cousin Tina Sparkle and joined the Hoax group before he disapeared roving. Busta was now the last of his litter and the last son of Flower and Zaphod in the group. Soon after, the Whiskers split again, Busta was among the spinter group. The other group became the Aztecs where Monkulus took dominance Busta, Miss Lilly The Pink and Rufus left the group and rejoined the Whiskers. After several months, Zaphod and some of Busta’s brothers left the Whiskers and joined the Aztecs. The group began to shrink do to evictions and roving. The new dominant male Zarathustra left and joined the Commandos. By 2008, the Whiskers were really low in numbers now but Rocket Dog was bitten by a snake but survived. However she sadly died when she was hitted by a car, and Ella took over. Dominant male Machu Pichu was also bitten by a snake but he survived too. Soon he and four other males left the group and joined the Lazuli kicking out all the adult males. Busta remained in the Whiskers and was the oldest male still in the group. Soon a Lazuli male named Thundercat joined the group and took the dominant male position. In mid 2008 Busta died of tuberculosis, while Beaker disappeared.

Busta was featured on Meerkat Manor, but they spelled his name Buster. Buster, Izzy and Suggs were

separated from the Whiskers when they were only a few weeks old. They were left with Sophie), Jogu and Mitch. Heroic Mitch left to find the Whiskers and lead them back to the pups. He ran into the Starsky group on his way and was chased away by Carlos and Shady. The Zappa were heading closer to the pups without knowing it. Jogu became an adult meerkat when he got to mate with Melanie an evicted female. The pups were reunited with the Whiskers later on. Buster wasn’t mention any more after that but he helped formed the Aztecs. 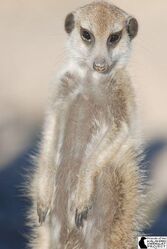 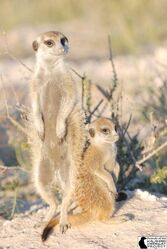 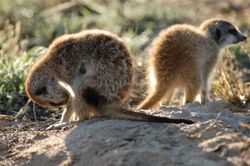 Busta and Beaker warming up 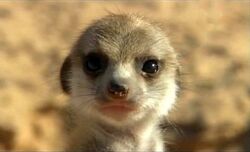 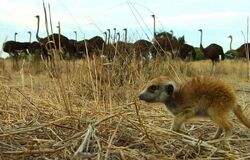 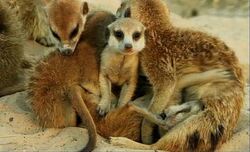 Busta with his family 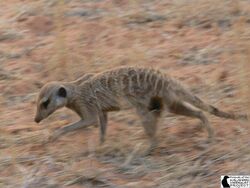 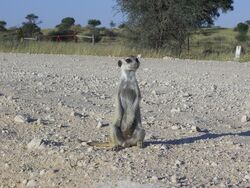 Busta on the main road 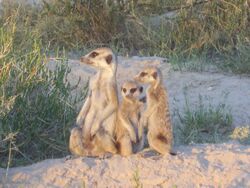 Busta babysitting with Sabota and Oriole