Clinton Baptiste(VFM123) was Frisky Mob born on October 22, 2005. His mother was Frascati and his father was The Dude. He was born in a large litter of five. His litter-mates were Rave On(VFF122), Chorley(VFF125), Holy Mary(VFF124), and Kenny Snr(VFFM126). They survived their first year and reach adulthood. When Clinton Baptiste became an adult meerkats he started to rove. He left the group with his older brother Fable in October 2007.

The two brothers soon came across the Rascals Mob. After hanging around the small mob the two Frisky males soon were able to join the group. Fable became the dominant male so Clinton Baptiste could not mate with any of the females. He soon took to roving again and left the Rascals. November within the year of 2007, he came across two Whiskers males, Ningaloo and his nephew Wollow and two wil males. The small group of males soon joined up with two evicted females from the Commandos named Benzedrine and her aunt Kleintjie who was from Gattaca origin.

The group of seven meerkats formed the Kung Fu. The group at first was small. Clinton Baptiste took the position of dominant male of the group beside Kleintjie. He mated with Benzedrine within the first few days, when there was no dominant female yet. She gave birth to the first litter of pups, VKUP003, Eliot, McDreamy, Bauer, VKUP007 and Woolf. The group encounter changes in dominance in the coming weeks. Clinton Baptiste was dominant male until he disappeared, thought to have been predated. Ningaloo took over the role of dominant male after him. 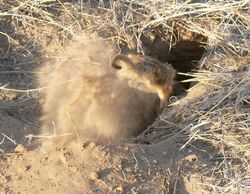 Clinton Baptistle foraging in the Frisky 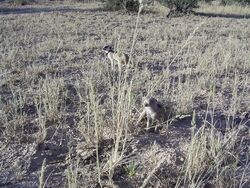 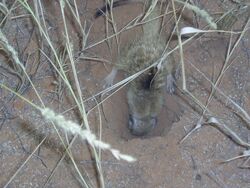