Ed Harcourt(VTYM021) was born on February 15, 2009 in the Toyota. His mother was Miss Lilly the Pink and his father was Greegan who were the dominant couple at the time. Ed Harcourt was born with two litter-mates sisters named Mrs Ball(VTYF020) and Cap'n(VTYF019). The Toyota were a small young group with few adults, however despite the odds, the pups managed to survived their first few months. Miss Lilly the Pink became pregnant again but aborted her litter and did not become pregnant again and give birth until September. By Then Ed Harcourt was around seven months old, old enough to care for himself but not yet to help out much with the new litter. Surprisenly Ed Harcourt went roving for the first time at the age of ten months old in December. Ed Harcourt and his two sisters survived his first year and Miss Lilly the Pink gave birth to five pups on Febaury 28, 2010; only a two weeks after Ed Harcourt's first birthday. Ed Harcourt was expected to help out more around the group and he babysat for the first time. Ed Harcourt didn't take up roving again until July 2010. A month later Cap'n died at the age of 18 months old in August. In October 2010, his father and the dominant male of the Toyota went roving with Ed Haroucrt and some othe rmales. Greegan and the other males returned to the group and didn't rove anymore. Sadly in December 2010 Greegan died and Paymister became the dominant male. That same month Mrs Ball disappeared after being evicted and Ed Harcourt went roving along with Otmar deBunwich and VTYM029. The other two males disappeared while Ed Harcourt returned to the group and went roving again in Janaury 2010. This time Ed Harcourt did not return and was considered Last Seen. 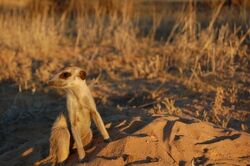 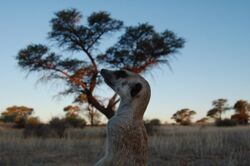