is an hour-long documentary, filmed in 2005 by Oxford Scientific Films, featuring the eventful life of a two-year old female meerkat named Ella. Young Ella faced isolation from her family after breaking the rules by having pups, a right exclusive to her mother, Lady Day who is actually Flower. However Ella raised her three pups and with stood the perils of the Kalahari Desert. She was a smart and clever meerkat, and used all her wit and courage to face up against her violent mother. Ella, A Meerakt Tale was a drama and the events were not all true and follows the life of Baddiel, a Whiskers female.

The story begins with an introduction to Ella's family, stating her uneasy status as a potential threat to "despotic" Lady Day's (Flower) position as a leader. Eldest daughter Ella had given birth to three pups, Charlie, Jango and Max, all of which were unwanted in the group. When Flower took the group out to hunt, Ella and a few other babysitters remained behind to watch over Ella and Flower's young. One babysitter, Yossarian, began a burrow move for an unexplained reason. Ella's pups were scattered during the move, she only managed to recover Jango and Max. Charlie was abandoned and didn't survive. Weeks following the tragic loss, Ella took her boys out and taught them about the world outside the burrow. During the evening, Ella's little sister Daisy mated with a rival group male, Carlos, but wasn't evicted. Instead, Flower, who was pregnant, evicted Ella, but allowed Jango and Max to live. After the gang split up on a foraging trip, Ella joined the half excluding Flower to be reunited with her boys, and took dominance. Unfortunately, Flower's half reappeared, and Ella's group, including Jango and Max, chose Flower over Ella, whom ran away. The next day the group encountered a rival group and won. Jango was injured, but survived along with Max. Flower also survived the battle, leaving Ella disappointed. Luckily for Ella, she met up with the roving male Carlos, the pair seemed set to make their own group. Ultimately, Ella had succeeded in what she had set out to do: raise Jango and Max.

Ella - The main character of the story. Ella is Flower's eldest daughter who breaks one of the golden rules of meerkat life; having pups. Seeing this as a threat to her leadership, Flower evicted Ella. Ella is forced to live on her own. At the end, she and her new mate Carols met and set an unknown future togther. Played mostly by Baddiel, but also by Mozart, Super Furry Animal and De La Soul.

Lady Day or Flower - The mother of Ella and leader of the group. Flower is the group's ruthless leader and evicts her eldest daughter, Ella, for having pups.

Carlos or Bobby - A rover who mates with Daisy. At the end, he finds Ella alone and they live togther to start a future. Played by Bobby and JD.

Yossarian - A male who inadvertently kills one of Ella's pups in a burrow move. Played by himself.

Max - One of Ella's pups. He is often calm and steady. Played mostly by Maladoy, but also by Ningaloo.

Jango - Ella's adventurous son. He often struggles to keep up with the group and is bullied by Flower's pups. Played moslty by Jogu, but also by Machu Pichu.

Charlie - A pup who sadly didn't make it to adulthood. Ella's eldest son. Played by VWM082 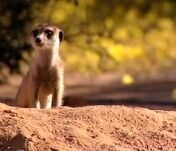 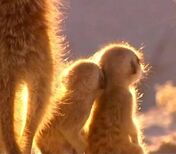 Bobby as Carlos or Himself