Meerkats Wiki
Register
Don't have an account?
Sign In
Advertisement
in: Young Ones Meerkats, Vivian meerkats, Dominate meerkats,
and 4 more

Jim Bob(VYM059) was born on November 11, 1999. His birth took place in a meerkat group called, the Young Ones. His mother was Morgause and his father was Keros. Jim Bob's litter-mates were Mary Ellan( VYF060), Douglas(VYM061), Jason(VYM062) and John Boy(VYM063). Jim Bob reached three weeks old and he and his litter-mates left the burrow for the first time. Jim Bob was very dependent of his elders for protection at a very young age. Jim Bob and his litter-mates reached 12 months old or a year to adult meerkats. He was soon ready to

take adult responsibilities like sentry duty and babysitting. He took sentry duty and like all meerkats, was vigilant to predators like the meerkats number one enemy, the Martial eagle and other raptors. Jim Bob reached a year old and was one of the main sentry duties seen in the Young Ones frequently. He was attacked by a predator at a year old, unlike most meerkats, he survived. Jim Bob had lost his right eye, but it did not seem to bother him at all. He reached the age of two years old, and, like all male meerkats, started to favor roving. Jim Bob remained in the Young Ones family for three years. His mother Morgause sadly died in 2004 while still heavily pregnant with another litter. Jim Bob's younger sister Veda took over dominant female of the family. Jim Bob went roving with a group of his brothers and left the Young Ones for good.

On November 15, 2000 he entered a group called the Vivian and took male dominance away from Captain Joans. Jim Bob and Rhian were the dominant pair of the group. He fathered Velvet, Viv'e and etc. Jim Bob was a great dominant male and a powerful leader. He and his partner Rhian were a strong dominant pair making their mob formidable. He fathered approximately twenty one offspring, all mothered by Rhian. Jim Bob reigned for three years until sadly, Tuberculosis struck the Vivian and Jim Bob died in April 22, 2007. He had lived to age nine before he expired.

Jim Bob is believed to the father of twenty one meerkats within the Vivian: 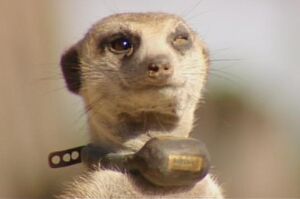 Jim Bob helped play Hannibal Commando on Meerkat Manor during season two and three. Hannibal was the one-eyed dominant male of the Commandos. The Commandos were featured from the Vivian group but the real Commandos group did exist on the Kalahari Meerkat Project. Hannibal led the Commandos through vicious territorial battles with the Whiskers Mob, but he died in his sleep during the winter before season four.