Kinkaju(VWF059) was born in the Whiskers on December 6, 2003. Her mother was Flower, the dominant female, and her father was Yossarian, the dominant male at the time. She was born with three litter-mates: two sisters called Super Furry Animal(VWF062) and Rocket Dog(VWF060) and one brother named Ragga Muffin(VWFM061). Kinkaju and her siblings survived to adulthood. Her brother Ragga Muffin disappeared from the group on May 7, 2005. She and her two sisters were all that remained of Flower's fourth litter. Kinkaju's father Yossarian was eventually overthrown by Zaphod. In September 2004, Kinkaju and some other teenagers took Mitch, one of Flower's new pups, away from the burrow to play with him. After a short while, Kinkaju abandoned her brother, but Mitch was saved and carried back to the babysitting burrow by Shakespeare. On December 7, 2005, both Kinkaju and her younger sister Armanita Ditch were pregnant. Sadly, by the end of the month, they both aborted. Kinkaju was evicted for the first time on January 24, 2006, by her mother Flower, but she rejoined the group. Then on August 25, 2006, Flower evicted Kinkaju, Mozart, Armanita Ditch, and De La Soul, along with two other females, from the group. The two other females rejoined Whiskers, but Kinkaju and the rest were not allowed to return.

The four evicted females teamed up with two Lazuli males, JD and Shoy and a Young Ones male named Shady to form the Starsky. JD took the position of dominant male. In September 2006, Kinkaju took the position of dominant female by scent-marking all the other members. A month later she was seen mating with Shoy and fell pregnant. Mozart, who was already pregnant, gave birth, but Kinkaju killed her pups. In late October 2006, the group encountered the Young Ones. The Starsky fled from the battle, but JD was separated and died of TB before he could rejoin the Starsky. Shoy then became the dominant male. In November 2006, Kinkaju gave birth to an unknown number of pups. De La Soul was believed to have killed Kinkaju's litter after she was seen with blood on her mouth. De La Soul then gave birth to two pups, but both of them disappeared. Around that time, Armanita Ditch died of TB. In January 2007, Kinkaju was pregnant again. She gave birth to a single, very small pup in February 2007. The pup was sadly lost a month later. Around that time, De La Soul died of TB and the remaining males, Shady and Shoy, both disappeared. This left only Mozart and Kinkaju behind. On the 20th of March 2007, the girls were separated but reunited the next day. On the 31st of March 2007, Kinkaju was Last Seen. She had lost a lot of weight, but the cause of her death was never discovered. Mozart was sadly predated in April 2007, bringing an end to the Starsky.

Kinkaju appeared in the very first episode of Meerkat Manor and went by her real name, although it was spelled as "Kinkajou". She was first seen stealing Mitch so she could play with him. She eventually lost interest and left Mitch, who had to be recovered by Shakespeare. Kinkaju had no further role in the first season after that. In season two she was often seen throughout early episodes babysitting alongside Mozart and Daisy(Super Furry Animal). She also briefly appeared in the episode "The Art of Leadership", warning the Whiskers of the Lazuli approaching. In season three, Kinkaju had a much bigger role. She was seen in the episode "The Mission", trying to win the position of dominant female of the Starsky over her older half-sister Mozart. In "Sister Act", Kinkaju killed Mozart's litter and was said to become the dominant female by doing so (in reality she had taken up dominance before killing Mozart's pups). In the following episode "The Death of Romance", pregnant Kinkaju successfully led the Starsky to a new burrow. Sadly, the dominant male Carlos(JD) then died. After that, the Starsky were not mentioned again for many episodes. When they reappeared in "Three Degrees of Separation", only three meerkats remained: Kinkaju, Mozart, and Whoopie(De La Soul). The three females went roving at the Commandos(Young Ones) to try and attract mates, but they were chased off by the group and were separated from each other. Whoopie never reappeared, leaving only Mozart and Kinkaju behind. The remaining Starsky females grew thin, weak, and stressed by their situation. At the end of the episode, Kinkaju was said to have died over a cold night. In truth, her fate was never discovered. 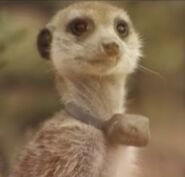