Back to page
View source

Lead The Meerkats is a simulation WiiWare game, where you are a meerkat and you must form a new group and help it survive.

In Lead the Meerkats you are a young meerkat and you have a lot to accomplish. You have been separated from your pack and the time has come for you to form your own meerkat pack. Are you ready for the challenge?

Name your pack and its meerkats. Dig burrow networks and enlarge your territory. Forage for food and grow your pack size. Stay on guard and be ready to make quick decisions. Run to the safety of the burrows or fight your enemies. Go head to head with a rival meerkat pack. Lead your pack to victory and rule the savanna.

Lead the Meerkat is the first game to simulate the exciting life of meerkats. Lead your pack and enjoy the company of these lively and endearing animals. Lead the Meerkats offers a fun game play experience for animal lovers of all ages.

You are a young meerkat and you have a huge task ahead. You used to live a happy and peaceful life with your pack at the lush and green savanna but one stormy night everything changed. A rival meerkat pack came from the desert and attacked your pack's burrows.

You fled in terror and got separated from the rest of your pack. In the darkness you stumbled to a river and got dragged under the water.

Next morning you woke up from the riverside. You had drifted to the other side of the river where the land is dry and the living conditions are much harder. To survive on the dangerous savanna you must set up your own meerkat pack. 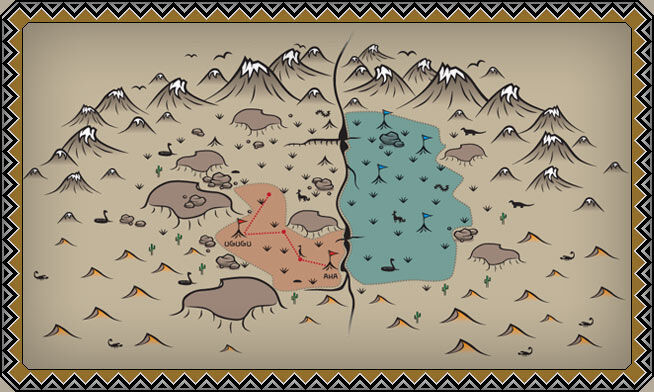 Game takes place at the African savanna (possibly it is the Kalahari desert).

Game world is a part of savanna that is surrounded by deserts and mountains. A river runs through the savanna and divides it to two distinct parts.

There are four different territories for you to explore. The game starts from the southernmost part of the dry side.

As you expand your main burrow network, your territory is automatically being enlarged. When you are done with the first part the game starts in a new territory the other game.

The first territory is peaceful but, in the second territory predators appear for the first time, who you must fight so that your group will survive.

The third territory (such as the fourth) is located on the other side of the river, and is much greener than the previous ones. However, in the lush area appear rival packs who you will have to fight in order to expand your territory.

You are the leader of your pack and you must defend your pack from predators and rival groups. Care for the young pups, dig for food and help the injured meerkats.

O.D. Meerkats, those lively little creatures whose mission is to the dig savanna full of burrows and groom each other till the last call after the work is done.

You are the leader of the pack and your daily job is to assign tasks to your pack members. The fate of the pack is in your hands so lead it wisely.

The Martial eagles are the most deadly meerkat predators. They fly from place to place looking for food and once they found their prey, they attack by flying in low and grab it with their powerful claws! Then, they carry the poor meerkat away. (Game Tip: Place guards around your territory, to get an early warning of a predater coming. It's safer to flee when you spot an eagle, do not fight it).

O.D. Warning the enemy is approaching! Martial eagles are your worst enemy. Eagles fly fast from place to place and they can see your meerkats from far away. If you ain't careful, you can get completely surprised by these fierce predators.

Place guards around your territory and you will get an early warning of the approaching enemy. Gather your pack together and show these feathered troublemakers what you are made of!

In the game you must find food to keep you and your pack alive. Scorpions are one of foods that meerkats eat in the wild. The scorpions are the meerkat's most favorite snack. It is true that they are able to eat it, without be poisoned!

O.D. It's a snack time! If you are hungry, go check the nearest grass area and you will probably run into scorpions or some other tasty critters.

Scorpions have a nasty habit of stinging you while you are preparing your meal. Don't forget the adorable puppies that are waiting in the burrows. Home delivery must work or the puppies won't have the strength to come out of the burrows.

Turtle are meerkats friends, meerkats can climb on their back and look out for danger. It is unsual for a meerkat to meet up with a turtle. Usually meerkats eat the turtles' eggs, so it is strange that they are friends in the game. (Game Tip: Place guards on the turtles. The turtles are going to follow you wherether your group goes).

O.D. Turtles like to spend time inside their shell thinking overly philosophical things like "What's the meaning of life?". I wonder what happens if you command a meerkat atop of a turtle...

The rival pack live on they other side of your territory, and they have a bad attitude. Watch out for them. As in the reality there are more than one meerkat packs in the African Savanna. These groups fight each other to win their territory. Many of these bloody battles have resulted in many injured and dead meerkats. (Game Tip: Attack the antagonist meerkats in the safety of numbers).

O.D. Now who are these guys? Are they space aliens or meerkats with a really bad attitude? Ahh... I guess you just have to reach the other side of the savanna to find it out...

In the game you have to give some commands to your pack. These are some of the commands that you can give to the meerkats that follow you:

Place guards around your territory and get early warnings of approaching enemies.

Carry your prey to the burrows to gain vitality. Carry injured meerkats to the safety of the burrows.

In burrows you are safe from enemies. Your territory grows as you dig burrows around savanna.

Gather your pack together.

Command your whole pack to the safety of the burrows.