Ziziphus(VAF002) was First Seen on January 13, 1994 in a group named Avatar. Her birth date was October 20, 1993. Her mother was Venus, who was the dominant female. Her father may have been the Avatar's dominant male. There were two subordinate adult males in the Avatar mob at that time who were thought to be her litter-mate brothers. Ziziphus was seen as a subordinate female named Lazuli a possible litter-mate sister. Ziziphus lived in the Avatar until October 1995 the Avatar members dispersed and were no longer followed after the death of Venus. When the Avatar were lost, Ziziphus and Lazuli disappeared with some wild males. There were only four surviving Avatar meerkats. They were Morgause and Igraine, who formed the Young Ones and Ziziphus and Lazuli, who formed the Lazuli.

The new group was called the Lazuli Mob, named after her sister Lazuli who established female dominance with Belgarion, who was the dominant male, despite the fact that Ziziphus heavily pregnent. On October 31 1995, she gave birth to her first litter ever, a litter of three female pups, who's names and ID Codes were unknown.  After just a short while, Ziziphus attacked and overhthrew Lazuli and took female dominance of the Lazuli group. Ziziphus and Belgarion then began to produce litters. She later evicted Lazuli in March 1996. She helped to form the Eleveara. On March 10, 1996, Ziziphus gave birth to five pups, two males two females and one pup that was predated Zizphus gave birth again on October 28, 1996. However, she was forced to abandon the litter after an encounter with the Isis Mob. In January 1997, Ziziphus evicted all three of her daughters from her first litter for first time. On January 15, 1997, she gave birth to a litter of five pups. On April 28, 1997, Zizphus became a grandmother when two of her daughters gave birth to a mixed litter of seven pups. Ziziphus was a productive leader and produced many chidren who founded many groups. Her two daughters, Grumpy and Sleepy founded the Moomins mob. Her sons Argon and Delpheus founded the famous Whiskers mob and her daughter Haslam later founded the Tottenham Mob. The Lazuli soon became a large group who established a large territory. In 2000, Ziziphus' Lazuli were chosen to star in a 30-minute documentary called Meerkat Madness. It was filmed during February 2000 while the Lazuli were trying to raise a litter of seven pups. The show was a sucess. The next month, Ziziphus led an attack on her rivals, the Whiskers, babysitting burrow. The Whiskers had a litter of four pups that were only just approacthing three weeks of age. The Lazuli attempted to raid the den but they did not have any sucess. They Whiskers returned home and chased the Lazuli away. Then, on December 28, 2000, Ziziphus did not emerge from the Lazuli burrow. She was assumed as dead from a desease, possibly TB. Her mate Belgarion later died on June 25, 2001 after leading the Lazuli with both of his daughters, Haslam and later his daughter Cazzana. Ziziphus led the Lazuli for five prosperous years and became a legendary KMP meerkat. Ziziphus was a very noble leader who's bloodline still runs in many groups today.

Ziziphus and the Lazuli were seen on Meerkat Madness: Walking with Meerkats in 2000. Ziziphus was seen as the dominant female of the Lazuli. Belgarion wore the radio collar at the time so Ziziphus was easily reconized by the tear in her right ear. Ziziphus had given birth to her litter of seven or Grumpy's litter, however none of the pups were given names at the time. Her son Figero and daughter Lulu also made an appearance. The Lazuli also encountered an unknown group.

All of Ziziphus' known litters

Born on March 10, 1996, the litter was fathered by Belgarion

Born on November 2, 1999, fathered by Belgarion

These are the images of the great Lazuli leader Ziziphus. 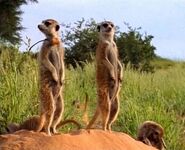